What the FTC Did to Protect Consumers

In the Patriot Puck matter, the FTC’s complaint, which names George Statler III as an officer of all the companies, alleges Patriot Puck markets hockey pucks — through its website, patriotpuck.com, and elsewhere online — to customers throughout the United States. According to the complaint, Patriot Puck’s claims in its advertising, packaging, and promotional materials include “Made in America,” “Proudly Made in the USA,” “100% American Made!” and “The only American Made Hockey Puck!”.

The FTC alleges that, in fact, Patriot Puck’s hockey pucks are wholly imported from China. Since January 2016, Statler and the companies doing business as Patriot Puck – which include Underground Sports Inc., Hockey Underground Inc., Ipuck Inc. and Ipuck Hockey Inc. – have imported 74,411 kilograms of hockey pucks, which is the equivalent of more than 400,000 standard-weight pucks, the complaint states. 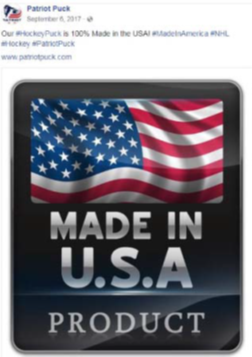 In the matter involving California companies Sandpiper of California, Inc. and PiperGear USA, Inc., the FTC’s complaint alleges that the companies claimed in advertisements, product labels, and promotional materials, and on company websites and social media, that their backpacks, travel bags, wallets, and other products are all or virtually all made in the United States.

Sandpiper and PiperGear market their products — which also include tactical gear and personal security items — throughout the United States, according to the complaint. Much of their allegedly false promotional material appeals to consumers’ patriotism. For example, Exhibit D is a Sandpiper logo that includes an American flag and the claim “U.S. Made By S.O.C.” (Sandpiper of California).

Similarly, according to the complaint, Sandpiper’s website states: “Featuring American Made products developed and manufactured by our sister company, PiperGear USA.”

What the Settlements Mean

Under the terms of the proposed settlement orders, Statler and the four Patriot Puck companies, as well as Sandpiper and PiperGear, are prohibited from making unqualified U.S.-origin claims for their products, unless they can show that the products’ final assembly or processing — and all significant processing — take place in the United States, and that all or virtually all ingredients or components of the product are made and sourced in the United States.

The orders also prohibit the respondents from making untrue, misleading, or unsubstantiated country-of-origin claims in their marketing materials about any product or service.

In a related matter, following a public comment period, the Federal Trade Commission has approved a final consent order settling charges that California-based Nectar Brand LLC made false claims that its Chinese-made mattresses are assembled in the United States.

First announced in March 2018, the FTC’s complaint against Nectar Brand LLC alleged that the company falsely claimed its mattresses are “Designed and Assembled in the USA,” but in fact, the mattresses are wholly imported from China, with no assembly taking place in the United States.

The FTC’s Enforcement Policy Statement on U.S. Origin Claims provides further guidance on the Made in USA standard. The FTC’s Made in USA page features cases, instructive closing letters, and the brochure Complying with the Made in USA Standard, which answers many of the questions companies ask.

The Commission votes to issue the complaints and accept the proposed consent orders in the Patriot Puck and Sandpiper-PiperGear matters were 4-1, with Commissioner Rohit Chopra voting no.

The FTC will publish the consent agreement packages in the Federal Register shortly. The agreements will be subject to public comment for 30 days, beginning today and continuing through October 12, 2018, after which the Commission will decide whether to make the proposed consent orders final. Comments in the Patriot Puck and Sandpiper-PiperGear matters can be filed electronically or in paper form by following the instructions in the “Supplementary Information” section of the Federal Register notice.

The Commission vote to approve the final order in the Nectar Brand LLC matter was 4-1, with Commissioner Rohit Chopra voting no. (The staff contact is Julia Solomon Ensor, Bureau of Consumer Protection, 202-326-2377.)

NOTE: The Commission issues an administrative complaint when it has “reason to believe” that the law has been or is being violated, and it appears to the Commission that a proceeding is in the public interest. When the Commission issues a consent order on a final basis, it carries the force of law with respect to future actions. Each violation of such an order may result in a civil penalty of up to $41,484.